Description of the Searchitect Framework:

This framework is used to simplify the usage of searchable encryption (SE) technology and enables the integration of new SE schemes.

A SE scheme enables a server to search over an encrypted database on behalf of a client without revealing the content to the server. A SE scheme provides 3 protocols:

The server part of the framework is designed in a service-oriented architecture (SOA) as a web service. In order to address the requirements of an easy integration of new SE schemes and the state of art client/server architecture we chose a microservices design. The basic framework consists of three entities a client, a gateway and a backend template, which holds a plaintext dummy implementation. The authentication of client queries is managed by the SE gateway which maintains a small database of user account information such as credentials and metadata of the repositories used for addressing the EDBs in the backend module. The authentication of each client request is validated at the SE gateway and in case of a successful authentication forwarded to the corresponding backend module of the query. The backend module are the server side instantiations of different implemented schemes and hold the scheme specific encrypted index data structures or databases (EDBs). All interfaces in between the microservices are designed in a REpresentational State Transfer (REST) manner allowing interoperability and loosely coupled systems. Compared to remote procedure calls (RPC) or remote method invocation (RMI) which are tightly coupled. Another benefit of RESTful services is that they are easy extendible and language independent. For the serialization of the exchanged content between the instances JavaScript Object Notation (JSON) is used and the communication between client and gateway is encrypted using Transport Layer Security (TLS). 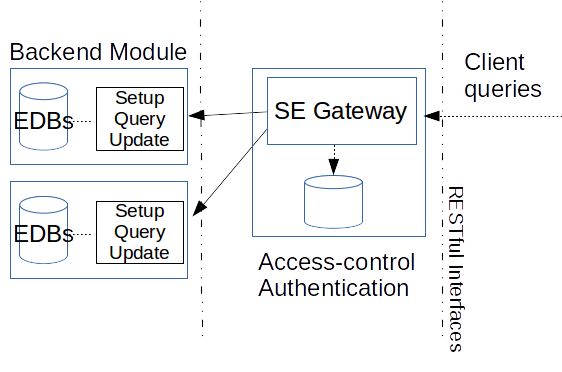 Functional Requirements for the Client:

Non-Functional Requirements for the Framework:

The source code of the implementation is structured in consideration of the shared classes between the client and server projects. 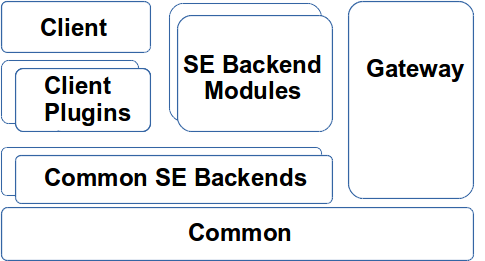 The basic projects are the client and on the server side the gateway and the backend module template, which share some common classes.The design is extendible with a new SE scheme by adding a new backend module, client plugin and their common classes. Only the port of the new endpoint backend module needs to be added in the application properties of the gateway and the Docker configuration needs to get adapted. Due to this structure all plugins at the client need to share a common interface, where each specific SE scheme plugin implements the same method signatures.

For the design we took a structured approach analog to the model-view-controller design pattern which splits up the functionality by operational concerns resulting in following packages.

All implementations make use of the Spring framework, the benefits of Spring are modularized lightweight components, which provide life cycle control of containers. These support inversion of control, also called dependency injection that allows to separate the configuration from use. Spring Boot has a very low overhead of configuration and comes with an embedded application server Apache Tomcat. This allows easy deployment of the stand alone tarred .jar files. Apache Maven is used for the dependency management of external libraries and the compilation. Following modules of the Spring framework have been applied:

In SE most workload is done at the client, the client extracts the keyword/document identifiers pairs using an indexer and then generates the encrypted index. All schemes make use of this process therefore the indexer is part of the client same as all user account related tasks. The indexer provided by the Clusion library supports different file formats in the keyword extraction using specific libraries like Apache PDFBox for PDF documents and Apache POI for Microsoft documents but also other file formats are supported. The indexing is based on Apache Lucene Analyzer using the standard analyzer for the English language set. This analyzer performs eliminations of stop words and noise like articles and conjunctions. Due to the use of multi threading the indexing process is very efficient. In the client package the Clusion indexer is wrapped by the document parser class.

A client object instance is related to a specific SE scheme implementation object of a plugin project. The method calls from the client class to the SE scheme implementations are generalized in the plugin interface definitions. During development and testing we figured out that the interface definition is a crucial point for scaling. As schemes are based on different data structures we needed to wrap the returned data objects. First approach was to do the serialization to the JSON transport string in the plugin class of the specific scheme. This works fine for small EDB objects but does not scale well and resulted in out of memory heap space exceptions of the JVM, because the JSON string was constructed in its full extend in memory. The second approach was to wrap the upload index by an abstract class which is extended by the specific upload index implementations and passed by reference to the client where the data is continuously streamed in JSON by the RestTemplate class. Another possible solution to enhance scalability would be to serialize the upload index into a file and manage the problem by streamed file uploads.

The following listing shows all methods which need to be supported by a client plugin:

When a scheme is response revealing and does not supply a resolve algorithm the search result is immediately returned without need for decryption.

The gateway uses the names of the backend {b_id} and ports to address the specific backends. The definitions of the names in the application.properties for the port mapping need to be the same as those in the docker-compose file. The interface of the webservice is provided by four controller classes in the Searchitect.controller package:

RESTful Interface definitions of the Gateway. The A column indicates required authentication with +, or A if an administrator privilege is needed, or in case of that no authentication is required.

Preparation for Deployment of the Gateway

In order to deploy the Gateway for testing scope, first a self-signed certificate needs to be generated by issuing these two commands in the root directory of the gateway:

Security Implementations in the Searchitect Gateway

We used the JJWT library (Json Web Token Support for the JVM) to issue and validate the JWTs. The Spring Security module needed to be extended by

These Spring Security modifications are contained in the Searchitect.security and Searchitect.config packages in the gateway.

A backend module holds and manages multiple EDBs of a specific scheme. Backend module just implement the functionality of the server part of a specific scheme and are not aware of any user or access management. Though this is done by the gateway. The EDBs are managed by a service layer, which may store the EDB objects in memory or persistent on the hard drive depending on the implementation. The EDBs are the resources in the RESTful meaning and addressed by a random generated universally unique identifier (UUID) also called repository name {r_id}, which is generated during the server side setup process. Each backend controller provides the RESTful API definitions shown in the table below, all exchanged objects are formatted in JSON with the exception of the check responses, which are strings.

A failed request results either in HTTP NOT FOUND (HTTP 404) or in case of wrong formatted JSON strings HTTP BAD REQUEST (HTTP 400). The interface definitions can also tested with command line CURL commands when the docker-compose configuration file exposes the specific port outside the container.

Build and perform unit tests of each instance manually

Run the following command at the level of each searchitect directory

Building of this software has been tested on Ubuntu 18.04 using openjdk-11.

Docker containers are built using the multistage feature. There is a builder image in the root directory and deployment images in the subprojects. A docker-compose file ties it all together.

After you have built the docker containers using the commands above, you can run them on your host using

if you want to move the docker process to the background.

The interface description of the gateway is after deployment available at:

How to add a new scheme

Generates the test-sets with following parameters

tested with ubuntu 16.04 and openjdk 10 (oracle jdk 10 causes a bc provider signing issue)